The scene: Lucas Oil Raceway, 10 miles outside of Indianapolis, Indiana, USA. Some of the flashiest cars you’ll ever see are lining up in lanes at one of the world’s greatest drag-racing tracks, preparing to race to the finish.

A Lifestyle of the Loudest

Welcome to the strange, wonderful world of car audio competitions. These uniquely modern sports events attract over 10,000 competitors every year, all competing to build the world’s loudest car. Slamology, a custom car show and music festival held at Lucas Oil Raceway, includes the biggest car audio battleground on the planet, bringing in amateurs and professionals from across the United States and beyond. There are also contests with a different feeling, like MECA, which VICE News profiled in 2017.

“This is a lifestyle,” says MECA president Steve Stern in that video. “Everybody loves driving down the road with their tunes jamming. That’s as American as apple pie. We just do it on steroids.“

The best thing about the competitive car audio scene is that it’s wide open to amateurs. Any starry-eyed amateur with a truck, a 1000-watt amp, and a dream can show up to an event and blow away the competition in his class.

If tinkering with your truck’s stereo until it plays “Shoot To Thrill” loud enough to blow out windows in Finland sounds like your idea of a fun weekend, here’s everything you need to know about getting started in competitive car audio.

First time car audio competitors are often overwhelmed by the alphabet soup of different associations, but in truth, most of them are very similar. Don’t worry too much about the difference between USACi and IASCA — any one will do, as long as they have the format or formats you want to compete in.

To get invited to championships at the end of the season, you’ll need to rack up a large number of points in one association. So if you’re dreaming of being named the loudest of the loud, pick whichever association has the most events in your area, so you can win as many points as possible.

Some of the leading groups, with links to their websites:

There are a few popular types of car audio competitions that almost every association hosts, along with a couple of more idiosyncratic formats specific to individual groups. Here are the ones you need to know about.

Sound Pressure Level (SPL) is a competition to see who can make the loudest sound with their vehicle’s audio system. SPL is the 100-meter dash of competitive car audio — sheer decibels are the only thing that matters here. It comes in two basic flavors: tone burst and street music.

Tone Burst vs. Street Music
Tone Burst competitions use a test sound called a “burp” to achieve towering volumes. The highest dB level you can burp at is your final score. Without the variability of music, tone bursts contests are almost entirely technical. The division for engineers and perfectionists.

Street Music competitions let you bring any widely available music to the table (i.e. no creating your own music so you can optimize your system around it). Competitors play their songs for a set period of time. Whoever maintains the highest dB average wins. Examples include MECA’s Park & Pound and USACi’s Street Beats.

Sound Quality (SQ) is the other side of the coin from SPL. SQ competitions are judged by professionals, who sit in your vehicle and listen while taking notes. The objective is to create a soundscape in your vehicle that gets as close to live quality as possible. As you might expect, SQ and SPL competitors don’t always get along.

Demo Contests sit somewhere between SPL and SQ. Demo competitors put on a concert out of their cars while being judged on a wide range of criteria. Examples include USACi’s Demo Classes and IASCA’s Bass Boxing.

Bass Race is unique to dBDRA events. It’s a musical average competition that uses “The Price is Right” rules: name your decibel class, then get your average as close to it as possible without overshooting.

Once you’ve picked an association and event, the next step is to determine what class you want to compete in. Like in any sport, classes are delineated so participants of all skill levels can face healthy competition.

Each association has different classes, but they all tend to break down along the same lines. If all you have is a few aftermarket amps in an unmodded car, you’ll be in a novice bracket. One class will be the highest limit for stock, driveable builds.

From then on, the rigs get more powerful and the cars more ludicrous, until classes like USACi’s Extreme Division feature mobile concert amps that happen to have resembled cars at one point.

The equipment you’ll need to bring to your first competition depends heavily on what events and classes you choose to compete in. At the bare minimum, though, this is what you should have in your car before you think about competing.

Showing up to a car audio contest without amps is like showing up to play baseball without a bat, glove, or shoes. When buying an amp, look for power if you’re going in the SPL direction, and quality if you’re more into SQ. In both cases, make sure the impedance on the amp matches that of the speaker or head unit. 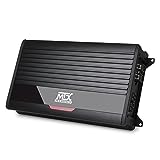 To get the best volume, you need to boost your lower frequencies. Get subwoofers and attach them to amps with similar impedance. If you’re competing for volume, find a sub with a ported enclosure; if you’re after quality, go with sealed.

Your entire sound system is running off your car’s battery, so it’s a good idea to replace your factory model with one that can handle your upgraded sound system. Good brands include Optima, Odyssey, Exide, and Supercharge.

What Are the Winners Using?

When shopping for your competition equipment, start by seeing what the previous year’s winners used in your competition format. You aren’t guaranteed to win just because you have the same loadout, but it’s a great starting point.

Also, talk to other enthusiasts, other competitors, and people who have bought the equipment you have your eye on. Making friends will get you everywhere in competitive car audio.

You’re not going to win. Not even your division. We’ve all fantasized about being the unknown challenger who comes out of nowhere and blows the veterans out of the water, but this isn’t a Hollywood movie (although a movie about competitive car audio could be awesome, but now we’re getting off track).

The point is that before you win, you’ve got to learn how to compete. Use these tips to get the most out of your first event.

If you find yourself bitten by the bug at your first competition, it’s time to think about how you can improve.

The sad truth is that no matter what competition format you choose, the easiest way to get better will be to spend more money on equipment. Going up a class requires bigger amps, bigger subs, a more powerful battery, more wiring, and maybe drastically remodeling your car.

Insider Tips for Competing on a Budget

However, competitive car audio is not completely out of reach to those of us on tighter budgets. Here are a few ways you can achieve better or louder sound without forking over a huge amount of cash.

There’s no sport in the world quite like competitive car audio. Imagine if engineers and bass addicts conspired to take over NASCAR, and you’re halfway to understanding the atmosphere at the biggest events.

Yeah, it’s an expensive hobby, which can make the scene feel unwelcoming at first — but we guarantee that the experiences you have will make it all worth it. And there’s nothing quite like the high you get when, just for a second, you were the loudest guy in Indianapolis.

Good luck, and we’ll see you on the lanes!

If you are looking to upgrade your car’s sound system, but limited space is an issue, an 8-inch subwoofer may be the perfect option. An